Brief illumination of the Silicone Outgassing from Sinoguide

During the application of thermal conductive pad, there is always bringing one big concern for the possible silicone outgassing 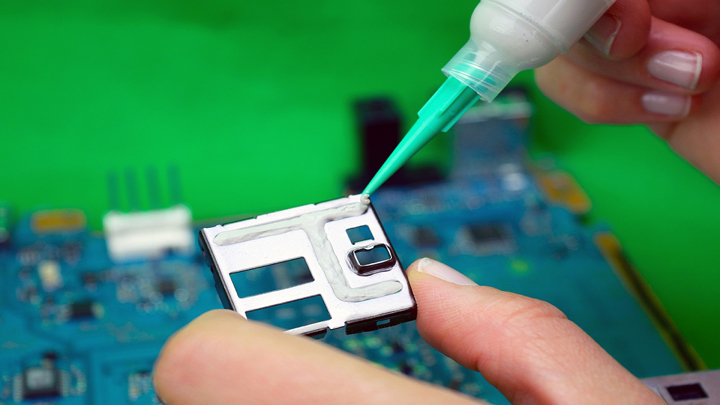 Silicone Outgassing is the volatilization of gaseous species from the thermal pad. It can be a significant problem in applications that are sensitive to contamination such as are common in the semiconductor, biomedical, and aerospace industries. In order to understand the outgassing associated with silicone, it is necessary to first examine the chemical origins of these volatile species. Low Molecular Weight Siloxanes (LMWS) In silicone, the bulk of outgassed species are LMWS. Low molecular weight siloxanes come from four primary sources:
The first source of LMWS is an intermediate in the polymerization reaction that leads to high polymer. Dimethyldichlorosilane is reacted to form dimethyltetramer or D4. The cyclic siloxane responsible for the majority of silicone outgassing. The dimethyltetramer ring is then opened and polymerized to high polymer. Generally high polymer is composed of linear siloxanes with molecular weight in the 300,000 to 800,000 g/mol range. To contrast, these linear chains have between 4,000 and 11,000 monomers each. The final polymerization reaction to high polymer is approximately ~85% efficient. Proprietary reaction mechanisms and post polymerization processes are used to clean the compound. Commercial grade silicone elastomers have as much as 5% residual low molecular weight siloxanes.
The second source of low molecular weight siloxanes are the carrier for initiators, pigments and additives. Low molecular weight dimethyl silicone fluids are used almost exclusively as the carrier medium for masterbatches. Masterbatches are the preferred method for compounding because they increase the safety of working with an otherwise hazardous substance. Masterbatches also increase the rate at which full dispersion occurs making compound easier and more efficient.
The third source of low molecular weight siloxanes arise from reinforcing and extending fillers used to increase the strength and modify certain physical properties of the final compound. The fillers are surface treated with silane and silanol molecules to make them compatible with the high polymer.
The fourth and final source of low molecular weight siloxanes arise from the high polymer.
Sinoguide Technology use special recipe on their developed thermal pad at very low oil-bleeding and siloxane outgassing although it is silicone based from 1w/mk thermal conductivity to 5w/mk high performance thermal pad.
+ GOOGLE CALENDAR  + ICAL IMPORT